With his unilateral action mandating employers require COVID-19 vaccinations, Joe Biden has declared himself king of the United States of America. This unprecedented power-grab makes the president no better than the petty dictators America has historically stood against, for better or for worse, since our founding. We no longer have a democratically elected government. We have a dictator.

According to a study conducted in Israel of 2.5 million vaccinated, unvaccinated, and previously infected people, natural immunity conferred by prior infection provided thirteen times more protection against the Delta variant than vaccination alone. Harvard epidemiologist and top vaccine researcher Dr. Martin Kuldorff writes, “With or without vaccines, COVID-19 cannot be eradicated. After the pandemic, COVID will become endemic, just like the four existing common coronaviruses.” Even Minnesota Governor Tim Walz last month rejected new restrictions and mandates saying, “We’re going to have to live with it.”

Polio has not been eradicated; only smallpox and rinderpest has. With or without vaccines, COVID cannot be eradicated. After the pandemic, COVID will become endemic, just like the four existing common coronaviruses. https://t.co/jVACMbrsHK

OSHA Standards Development requires workers to be in “grave danger” before enacting emergency restrictions on workplaces. For young and healthy people (including healthy elderly people), the fatality rate of COVID-19 is less than 1%. For most people who contract COVID, the standard treatment is the same as any other coronavirus: Rest and drink plenty of fluids. Yet, Joe Biden has granted these emergency powers to OSHA, even though for the vast majority, this virus presents very mild danger.

Forget The Science. Never mind the law. Joe Biden hopes to force his dictates to the detriment of public health and freedom, science and law be damned.

Of course, Joe Biden shares responsibility here. While public health bureaucrats were downplaying the seriousness of this disease and Democrat politicians were implying that it was racist to worry about it, Donald Trump’s first action was to close the border to incoming travel from China. Border closures were of course a long-held desire for the former president, so he jumped at the opportunity to couch this political move in public health language. Presidents have a long history of using crises (and perceived crises) to assume power themselves. The continued existence of the useless TSA, some 20 years after 9/11, bears this out.

However, to his credit, President Trump took very little federal action aside from border closures, a power which the president arguably has, and the eviction moratorium, a power no executive branch agency has. Besides these violations, Trump left pandemic management up to the states. Joe Biden, who up to this point has taken pride in his opposition to unilateral action by the Executive Branch, has not followed suit. Make no mistake, these mandates are without precedent. Not since Franklin D. Roosevelt banned the ownership of gold in 1933 has a president assumed such power.

Walz’s Restrictions Were Needless and Destructive

Governor Walz was among the first Democrat governors to begin lifting restrictions last year. Anyone with common sense understands that locking people in their homes and forbidding any activity which makes life worth living leads to mental health crises and civil breakdown. Following the murder of George Floyd at the hands of government agents and the destruction of South Minneapolis, Governor Walz remembered common sense and lifted his initial business shutdowns.

The governor’s assumed powers didn’t end there, however. Many small businesses were forced to close permanently thanks to Walz’s strict occupancy limits. We all were forced to wear arguably-useless masks everywhere we went. Walz didn’t finally remove all state restrictions until May of this year, over a year after they began. And, of course, the needless fearmongering that made people terrified to venture out even after they were allowed to do so has never ended.

Contrary to his constant claims to the contrary, Governor Walz’s restrictions had no clear impact. When compared to our neighbors like Wisconsin and Iowa, which took a very light touch, and even the Dakotas, which had no restrictions at all, our “curves” look essentially identical. The spikes and declines have tracked regardless of “mitigation” efforts. The data proves it out: Government mandates and restrictions have no impact on this respiratory virus. We will indeed have to live with it. 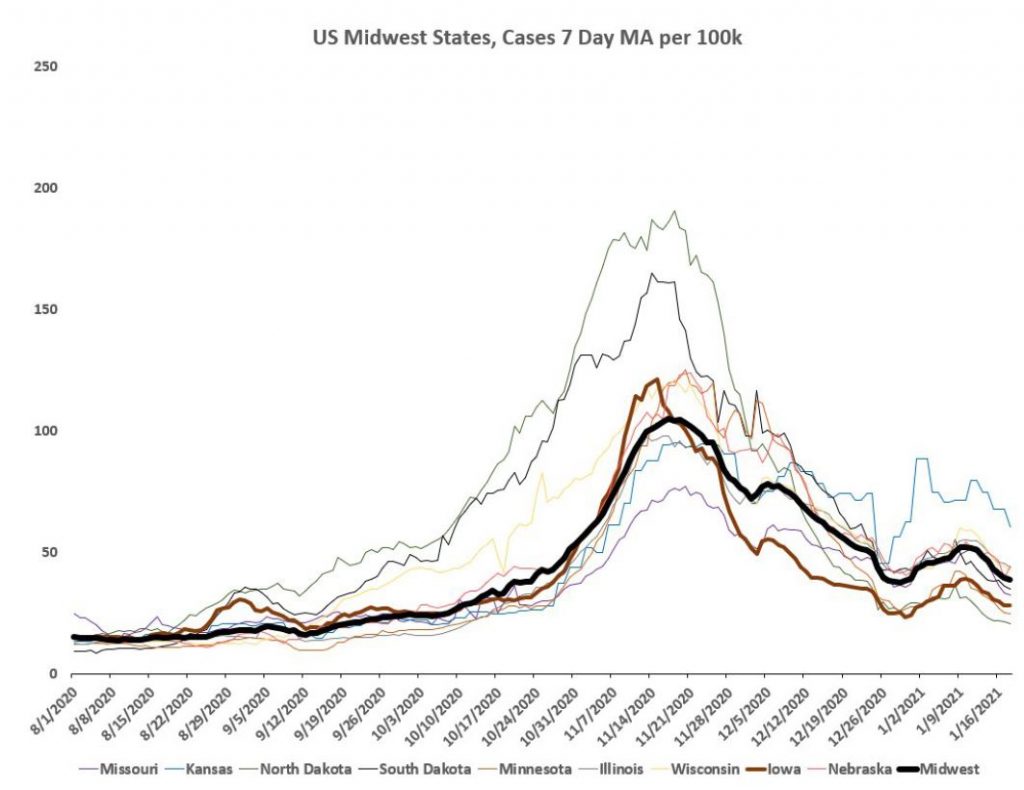 However, even if the mandates had worked flawlessly, this is the sort of power that should never lie in the hands of a single person or even a single state agency. Yes, it’s far more troubling for a president reigning over 300 million people to take unilateral unconstitutional action violating health freedom and individual liberty. But the same powers in the hands of a governor ruling over 5 million people is nothing to sneeze at, either. In a free society, this kind of power to control individual action lies in the individual, not in a ruler.

That is water under the bridge, though. Governor Walz’s emergency declaration has lapsed, and his power is no more. He has promised us that he will not re-assume them. Let’s hold him to that. Let’s look forward and encourage our politicians to stand up to this new federal tyranny. The states created the federal government, and the federal government’s power only exists insofar as the states allow it.

The Upper Midwest has a long and proud history of resisting federal tyranny. The reader might remember the Fugitive Slave Act of 1850 from history class. This heinous law passed by Congress made it illegal to provide aid or protection to runaway slaves and even enacted severe punishments on federal agents who refused to enforce the law.

What is not taught in government schools is the nullification of this disgusting stain on the record of Congress. The states of Wisconsin and Michigan passed laws making it illegal for the Fugitive Slave Act to be enforced in those states. The Wisconsin Supreme Court declared the Fugitive Slave Act unconstitutional by virtue of its obvious violation of the tenth amendment, which reserves to the states any power not expressly delegated to the federal government.

We call on the legislature to follow the lead of the heroic 19th century Wisconsin legislature. Our elected officials must resist this unprecedented executive overreach by forbidding any enforcement of these rules, including by OSHA, within the state of Minnesota. This is not a partisan issue. The line must be drawn here. Who does the government of Minnesota represent? Is it Minnesotans? Or is it Joe Biden?

Further, we call on all employers to cease any sort of mandates or restrictions. While we recognize the need to provide a safe and healthy work environment for employees, it is now obvious that COVID-19 poses a comparatively minor threat to most people. Yes, COVID-19 is an ongoing public health issue, but individuals and businesses must continue to have the freedom to make their own decisions based on their own acceptance of risk and their own individual circumstances.

How the People Can Take Action

Libertarians are bridge-builders. Those on the left have joined us in our decades-long position on the rights of gender and sexual minorities in society, much of our advocacy for bodily autonomy, and in our opposition to police abuse. Those on the right have joined us in our commitment to economic justice for small businesses, our opposition to the regulatory state that only serves to benefit massive corporations, and, more recently, in our resistance to the government’s unprecedented and unwarranted mandates and restrictions.

The time has come to join together. We call on the people of Minnesota, regardless of political party or ideology, to contact their legislators and encourage them to declare this federal overreach null and void. We ask the people to contact their representatives in Congress in support of the bills that surely will be written in opposition to this tyranny. Most importantly, we encourage the people of Minnesota whose employers refuse to do the brave thing. When a cowardly employer asks to see vaccination records or test results, refuse to show them. Your health records are yours. They are not public information, and nobody has the right to see them. And when the employer threatens disciplinary action, accept it. Do not quit your job voluntarily. Make them fire you and live with their decision.

President Biden made it clear in his announcement of these orders, “This is not about freedom or personal choice.” We beg to differ. Now is the time to say enough is enough. If we wait any longer, it will be too late.